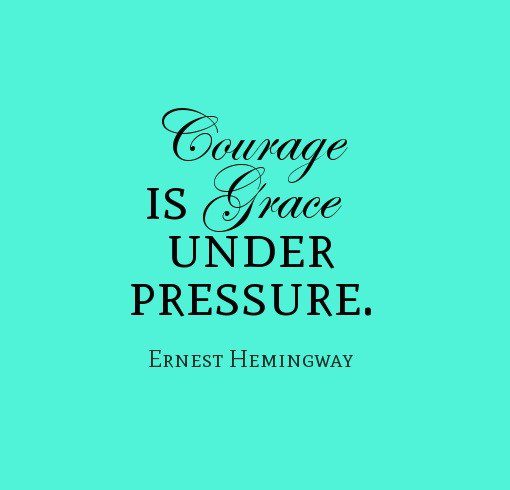 The 50 Best Quotes About Courage – Courage Quotes. Need a pick me up? Have a look at this great collection of uplifting quotes and share them on social media.

I learned that courage was not the absence of fear, but the triumph over it. The brave man is not he who does not feel afraid, but he who conquers that fear.
– Nelson Mandela

You gain strength, courage, and confidence by every experience in which you really stop to look fear in the face. You are able to say to yourself, ‘I lived through this horror. I can take the next thing that comes along.
– Eleanor Roosevelt

Courage is resistance to fear, mastery of fear, not absence of fear. – Mark Twain

You will never do anything in this world without courage. It is the greatest quality of the mind next to honor. – Aristotle

We must build dikes of courage to hold back the flood of fear. – Martin Luther King, Jr.

He who is not courageous enough to take risks will accomplish nothing in life. – Muhammad Ali

Only those who will risk going too far can possibly find out how far one can go. – T. S. Eliot

Courage is being scared to death… and saddling up anyway. – John Wayne

Man cannot discover new oceans unless he has the courage to lose sight of the shore. – André Gide

Efforts and courage are not enough without purpose and direction. – John F. Kennedy

Courage is the art of being the only one who knows you’re scared to death. – Harold Wilson

If we’re growing, we’re always going to be out of our comfort zone. – John Maxwell

Faced with what is right, to leave it undone shows a lack of courage. – Confucius

Inaction breeds doubt and fear. Action breeds confidence and courage. If you want to conquer fear, do not sit home and think about it. Go out and get busy. – Dale Carnegie

A hero is no braver than an ordinary man, but he is braver five minutes longer. – Ralph Waldo Emerson

I believe that courage is the sum of strength and wisdom. You take away wisdom from the equation – courage may turn to rage. – Dodinsky

Courage: the most important of all the virtues because without courage, you can’t practice any other virtue consistently.- Maya Angelou

The only courage that matters is the kind that gets you from one moment to the next. – Mignon McLaughlin

It takes a lot of courage to show your dreams to someone else. – Mary Anne Radmacher

Have the courage to live. Anyone can die. – Robert Cody

Keep your fears to yourself, but share your courage with others. – Robert Louis Stevenson

The bravest thing you can do when you are not brave is to profess courage and act accordingly. – Corra Harris