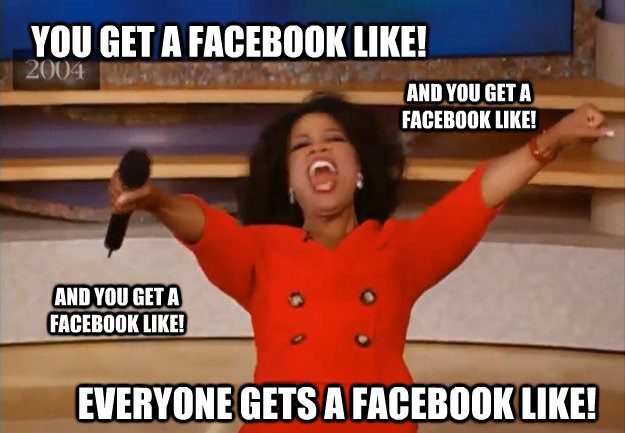 Want to get a ton of likes on Facebook? Need some funny status ideas? You’ve come to the right place! Check out this awesomely cool collection of Funny Facebook Post Ideas.

In high school, some kids told me they’d give me $20 to hang out with them, but turns out it was just clique bait.

Thanks for defining the word “many” for me, it means a lot.

Without a doubt, my favorite Robin Williams movie is Mrs. Fire.

One night, as I as lying in bed, I looked up at the stars and thought to myself: “What the fuck happened to the roof?”

The difference between a new boyfriend and a new dog: after a year the dog is still excited to see you.

Of all the bodily functions that could have been contagious, I’m really glad it is the yawn.

Sometimes I wake up grumpy, sometimes I let her sleep in.

My girlfriend broke up with me because I’m a compulsive gambler and ever since, all I can think about, is how to win her back.

Don’t you hate it when someone answers their own questions? I do.

The little boy asked his father ‘DAD how much does it cost to get married? Father replied ‘I dont know son. Im still payimg

5 out of 6 scientists say that Russian roulette is safe.

I own the world’s worst thesaurus. Not only is it awful, it’s awful.

I think there are about 1-2 million baseball fields in the world, but that’s just a ballpark number.

I woke up this morning and forgot which side the sun rises from, then it dawned on me.

The best thing about good old days is that we were neither good nor old.

Whenever I read a list saying “Top 10 things to do before you die”, I’m always surprised that “yell for a doctor” is never #1.

For as long as I can remember, I’ve had memories.

If laziness was an Olympic sport, I’d try to come in fourth so I wouldn’t need to walk up to the podium.

Only 1 in 7 dwarfs are happy

Whenever I see someone with one eye, I ask them if it was all fun and games up to that point.

I used to be addicted to swimming, but I’m very proud to say, I’ve been dry for six years.

I sometimes worry that the person who thought up Reality TV may be thinking up something else.

If you were dating an FBI agent and you broke up, they would be your fed ex.

I didn’t believe my friend who said yoga could fix my bad posture, but now I stand corrected.

One of the best things about being forgetful is

I’ve been reading so much about the bad effects of smoking, drinking and drugs, that I’ve finally decided to give up reading.

My girlfriend and I often laugh about how competitive we are, but I laugh more.

My grief counsellor was so good that when he died, I didn’t care.

I’m so old, the last time I used Tinder, it caught fire.

I totally understand how batteries feel because I’m rarely ever included in things either.

For a good healthy dose of insanity, when leaving the zoo, start running towards the parking lot, yelling ‘Run for your lives! They’re loose!’

I told an insecure midget that he was selling himself short, whoops

My sexual desires have been getting out of control, but it wasn’t until I spanked a statue, that I knew I’d hit rock bottom.

A book just fell on my head, but I’ve only got my shelf to blame.

I wrote a book on penguins, but in retrospect, I realize that paper would have been easier.

Cops don’t like it when they tell you to put your hands up in the air then you wave them like you just don’t care.

I just bought a new blindfold. Can’t see myself wearing it though.

I’ve just written a song about tortillas; actually, it’s more of a rap.

Woke up this morning and the alarm clock was laughing at me….then I realized it was upside down and the time was 7:07

For all you who think I’m not worth much, I’ll have you know I have many great qualities or as my therapist calls them “symptoms”.

I don’t Judge People,.I just laugh at them.

I find the best way to burn carbs is with a toaster.

I accidentally super-glued my thumb and index finger together today, and I started to panic, but then I realized it’s always going to be okay.

I’ve seen less of my dad since the amputation.